Imagine, if you will, the following conversation, at a different time, in an undisclosed location…Autumn of ’66…just after the murder of Cheri Jo Bates:

Momo: Looking good Frankie. What did you want to talk about?

bad casino deal. A real drag for everybody!

Momo: I’ve forgiven you Frankie. You’ve done our people proud in the meantime. I won’t forget how you kept me from going to the slammer. Ask me anything, anything, and I’ll make sure it gets done.

Frank: Well there is one thing. it’s about our mutual friend….

F: Yeah. You know he’s always been solid. Protected some of your best assets. And mine. I know- and you know- he’s been loopy at times tho. Well, its been worse since his accident.

M: When was that again?

F: Back in the Fall of ’62. Since he hit his head in that car accident…he can’t seem to hold it together. Unfortunately he hasn’t lost his memory! Anyway recently it’s become more of a problem. He’s killed a girl.

M: I heard about it. He must have flipped out! Very messy. What do suggest we do with him? To take care of it I mean?

F: I’ve got an idea. It’s a little wacky. But I think Kane deserves some kind of protection for his years of loyalty. Being that he’s never broken the Code and all.

M: Yeah. OK. I don’t want to see him get hurt. Alright, what’s your wacky idea? I should know better but I’m listening….

F: You know how he’s always fronted himself with a legit construction business? Well I know two guys, construction guys, partners up in Tahoe. They came to talk to me about it

a week ago. They’re definitely willing to take him under their wing. On a permanent basis, so to speak.

M: OK. Yeah. I think I know who you’re talking about. Joe K and his partner…what was it? Maloff I think. I met them up there in Tahoe once or twice. What do they want?

F: What do they want?

M: Yeah Frankie. What do they want in return? Nothing in this world comes for free. You of all people should know that by now.

F: Well, yeah, they want a piece of the casino action up around the Lake. They want to expand but they’re stuck building motels- it’s not a big money maker for them. And they know they can’t break in without your blessing- and without offering you a piece of the 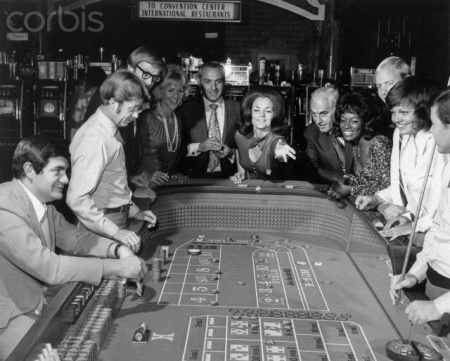 pie. We’ve been shut down up there for 4 years. And Vegas is changing too…as you know too well Momo. I think it’s a decent offer. I’d like to see some of that action again myself.

M; Yeah I heard. I like it. So far. But how are they going to cover him for this murder rap? So unfortunate. Beautiful girl. Good Catholic girl too. We can’t be dragged into that Frankie!

F: I’ve asked Joe K, the Greek, he’s more of the hands-on type, builder type of the two…if he’d bring Kane on as an employee, a sub-contractor. So as to keep an eye on him. He’s agreed. As for the murder rap, Joe says he can make the murder look like the work of some crazy lunatic by writing letters to the cops and the papers. Just like the Dahlia killer did. You remember back in ’46?

M; Yeah they never caught him. They had him but they let him go. Cops were more crooked than we were in those days!

F: Joe K is a smart guy. And I trust him- he’s not a snake like the Kennedys. I really think he can pull it off. There’s nothing connecting Larry K to the murder as far as I’ve been able to tell. And Joe has promised me he’s willing to do whatever it takes beyond that to keep Larry K out of the papers.

M: OK. I’ll put out some feelers with Riverside PD and find out more. You can go ahead with the deal. You know my percentages. But if Joe K can’t handle it at any point…the deal is off. Be sure to tell him that, Frankie! 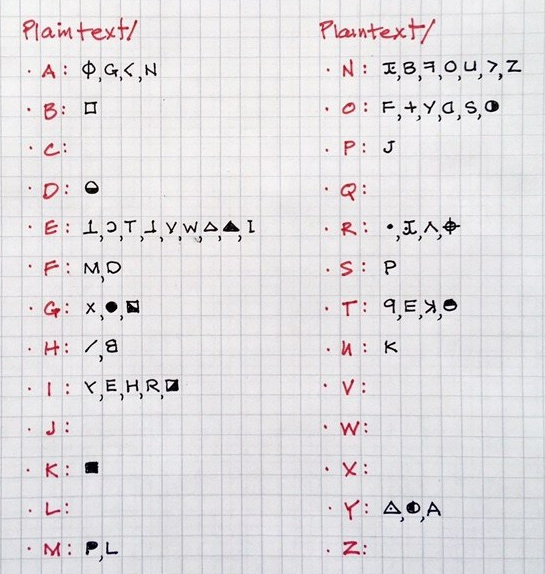 There is no ‘J’ plain-text uncovered. Backwards ‘J’ is not used as a symbol except once.

There is rhyming throughout the solution. He can’t resist dropping a hint about his name- knowing it will likely never be solved.

One for the history books. It’s his last chance before the silliness at the bottom of the cipher: “Reneor Pontyaeoni”.

I propose the unsolvable letter is a ‘J’.

Because he’s ‘tyrhed’ now, and ‘the Zodiac’ business is pretty much done.

He must have thought: The Zodiac Myth has been permanently etched in to The American Psyche. Way too much heat! Time to move up to the Lake for the new biz. And we’ll take Kane with us. A few months later they did just that. By ’75 they’d started building their first casino, ‘The Sundowner’, in nearby Reno, Nevada.

‘Befo(re) I (O)…Joe…go…so’…. He’s saying: before, I owed a debt, but now it’s effectively paid. We’ve covered for Kane. At least for the time being. And let’s keep him away from the Bay Area for awhile til things cool down. So now ‘my Thing’…is the casino business.