Twin Peaks near Tahoe Pines California. Sometimes listed as Twin Peak. Peak through the Pines? Image above from the SF Chronicle

Return address symbol above, from the confirmed Zodiac ‘Halloween’ card of October 27th, 1970. The same symbol appears inside on the unfolded card. 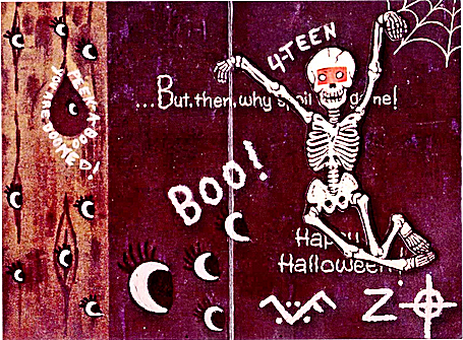 Lass disappeared on September 6th, 1970. The eyes, and the wood, with the phrase ‘peek a boo you are doomed’ were considered a threat to the recipient, reporter Paul Avery of the SF Chronicle, but could be describing Donna Lass’ abduction. Could it indicate she was still alive at this date, a prisoner, whom he’d soon kill?

4-teen here I believe is a reference to Revelation 14, and is rhyming with ‘Halloween’. It isn’t a victim count which some have proposed. It takes us back to victim Cecelia Shepard, the Seventh Day Adventist. Revelation 14 is key to their belief that we have entered the period before the end times. In which ‘Angel One’ announces that the ‘investigative judgement’ has begun. A strong clue that Zodiac was SDA.

There’s also a seemingly sophisticated reference here to Elizabeth the 1st seen in this famous portrait. The eyes and ears in the dress were to show her enemies that nowhere was safe- she had her spies everywhere. Was Zodiac telling Avery he had an inside source in the investigation?

The next related missive is the ‘Pines’ card, below top. I’ve enlarged a portion of the card and added the underline:

This card, received many months after Donna Lass disappeared, was confirmed as being from Zodiac by one expert. It seems to refer to Lass/South Lake Tahoe

Is the earlier return address symbol a mapping of an abduction and murder? She disappeared from South Lake Tahoe- which I have positioned at the end of one of the ‘arms’. The message in the Pines card: ‘Peek through the Pines’ echoes the earlier Halloween ‘peek a boo…’ coming from a knothole in the wood.

Go ‘past the Tahoe areas’. Could this be another deceptive misspelling? In this case- of ‘Peek’? The instruction with the map overlay (as in the ‘Bus Bomb’ letter) then might be: ‘one has to go through Tahoe Pines to get to the base of  Twin Peaks Mountain in order to find her’.

The Tahoe ‘areas’ might then refer to all the towns that one must pass through, along the easiest way, by Hwy 50 and 28. The dots? Goosebumps here!

The ‘Sierra Club’ called out in the card was likely the Sierra Club Lodge, located near Donner Pass (the Zodiac may have used the punned name as a mnemonic device). Adding this location with a broader stroke and using the same place names, Twin Peaks and Tahoe Pines are still central. Can Donna Lass finally be put to rest? 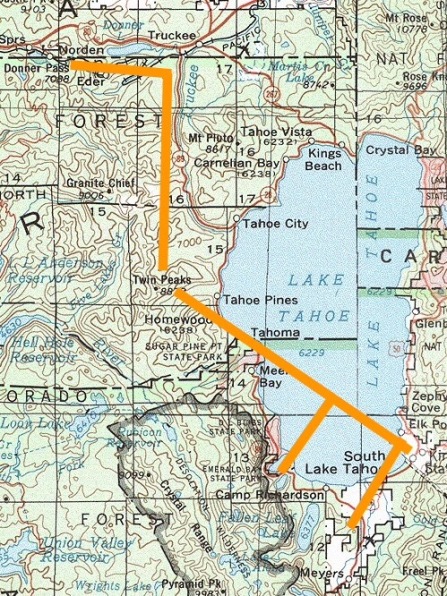 Kane was working down the hall from Donna at the time. He’d apparently asked her out a couple of times and been turned down. The pattern here could be rejection: Bates, Shepard and now Lass. The other gun murders done to make it seem like a random killer. The hardest to catch. Covers up his real motive.

Kane was selling real estate. In the few months he’d been there he might have gotten to know the Lake Tahoe area pretty well. But was it him or was he being set up by fon or another?

Fans of the TV series might be delighted, although there is no known connection between the imaginary town of Twin Peaks near Seattle and our Mountain. The series plot was inspired by stories surrounding a 1908 murder in New York State, however, according to co-writer Mark Frost.

Thanks to Richard Grinell whose ZodiacCiphers.com Donna Lass articles inspired much of this piece