As an experienced astrologer, I’d have to say the most surprising thing about the chart for October 30th, 1966, for Riverside Ca, is realizing that for the time period of the murder, the Taurus Moon is ‘Void of Course’. That is, Luna will not make any more aspects to planets until she enters a new sign, in this case Gemini, later that night.

For one thing it means the murder was most likely an impulsive one, involving a loss of control on the part of the killer. For nothing pre-planned tends to work out quite the way we want during a Void Moon. It immediately brings to mind suspect (and Taurus) Kane, with his frontal lobe dis-inhibition.

And comparing his chart to the murder chart, I see there are many conjunctions and other strong aspects.

The bi-wheel chart above shows some of these aspects in relation to the event chart for 6:30 pm. I have used the birth date of April 29th, not the 26th, as is sometimes referenced, as it gives Kane the same Pisces Moon as Karadanis.

I had previously accepted a time of death of 10:30 pm for Cheri Jo. What has shifted my whole theory of this timeline: realizing that just after the Moon goes Void in Taurus around 5:30 pm, she makes a conjunction (orange circle in the 1st chart) with the fixed star Algol (circled in violet- same chart). This star is associated with Medusa- who- though her head had been cut off, its gaze was still deadly. Algol is the root for the word ‘alchohol’. Think- the Stones song ‘Gimme Shelter’: with horrible riotous events, and especially damage to the head or beheadings.

Kane has Mercury near Algol natally. And remember- he’d had frontal lobe damage as a result of a car accident in the early 60’s. As Cheri Jo was almost be-headed in the attack, choosing between the two most likely times of death: 6:30 pm and 10:30 pm: I would now have to say 6:30 pm is far more likely, being closer to the Algol alignment. I have studied the effects of Algol in charts for many years and have seen that it definitely lives up to its reputation, but the conjunction must be a close one.

I’ve tried to stay away from using forensic astrology in this blog, especially since I don’t see Zodiac using any very sophisticated astrology. But in this case I think it has allowed me to stumble onto a much more workable timeline theory than I’ve seen anywhere else.

If you are just now picking yourself up off the floor, still laughing uncontrollably, then by all means please ignore the above and take a look at my new timeline and diagram below. The murder scene has been widely misinterpreted, as the houses under construction have been built over, but by using the old newspaper crime scene photos to check, I think I have clarified a few things:

Fig. 1  6:05 to 6:15 pm: Cheri Jo checks out books from the Library front desk and drives off from her parking spot near the Library entrance in order to meet a friend nearby, who has a copy of the bibliography she needs. That person, a possible ‘boyfriend’, has never come forward- out of fear perhaps. Her car is spotted returning to the Library area around 6:10 pm by two other friends. Cheri Jo parks her ‘bug’ here in the alley and locks it, about 6:15 pm, to run into the Library a second time, in order to check out more books from the bibliography, as parking is no longer available convenient to the Library entrance. It’s still light out and she doesn’t anticipate her visit taking very long.

Fig. 2  Larry Kane, siding and roofing sub-contractor, leaving work at one of the houses just at the moment she arrives,strikes up a conversation with Cheri Jo. “You have lovely cheekbones, was your mother eastern European?” CJB: “Yes my mother was of Polish descent- Karolewicz”. Or something to that effect- the dashed ellipse indicates the area of the chance meeting in the driveway and alley- just after 6:15 pm.

Fig. 3  Inappropriate gesture by Kane leads to a violent struggle/murder at roughly 6:30 pm. (Cheri Jo is not seen in the Library again that evening.) It gets dark and her body/car are not seen in the unlit deserted alley and driveway.

Fig. 4  6:35 pm  Kane walks to a parked car, leaving a trail of blood from a cut on his hand, and from the knife he carries.

Fig. 5  He gets into the car, which quite likely is being driven by a waiting friend or co-worker, since the car moves off without anyone witnessing anything unusual.

7:00 to 9:00 pm  Kane and friend/boss, Joe Karadanis, and Joe’s wife Elsie, are off campus trying to calm down the agitated killer. They create a story of false leads to mislead police, then return to the crime scene, now in darkness, to plant fake evidence.

Fig. 8  10:00 to 10:30 pm  After planting red herrings near the body, they move the ‘bug’ to the front of the Library, making it look like it had been sabotaged there. Leaving the keys inside, the doors unlocked and the windows open makes it appear Cheri Jo has been careless and gone off, say, after 7:00 pm, after dark, to a dirt alley with a deceitful Good Samaritan who’s offered to fix her Beetle. Elsie Karadanis fakes a scream and the 3 evildoers drive off, their car unseen in the night.

Here is Cheri Jo Bates birth chart, for my astro-peeps:

Note the Mercury/Mars Opposition. This young lady was not afraid to speak her mind- even against tough opposition. He first put his hand over her mouth from behind- a violent struggle ensued. He stabbed her repeatedly and then cut her throat to keep her quit. Then kicked her out of frustration- because he had not wanted to kill her- but this hair-trigger maniac had lost it! She was going to scream blue bloody murder at the top of her lungs- and Kane would have been found out! He might have imagined the headlines: “Former Hitman for Murder Inc. and Show-Biz Chaperone Arrested on Campus -Beautiful Young Coed Slaughtered!”. 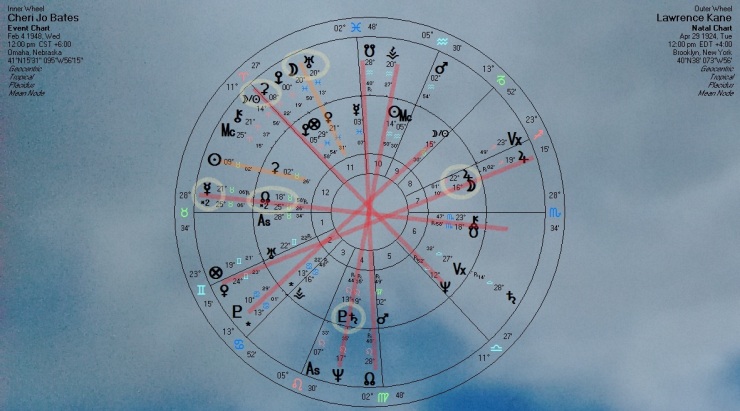 In this bi-wheel chart we can see many violent oppositions and conjunctions. Note especially the alignment of Kane’s crazy Uranus/Moon with Cheri Jo’s Venus; his Mercury with her North Node; and the 2 powerful Jupiters, Cheri’s paired with her Moon- he must have said something to make her laugh, as an introduction.

His Neptune conjoins her stubborn Pluto/Saturn powerhouse and opposed her Sun. She was most likely blindsided by the attack. Note again that both have a fateful aspect to Algol. If I’m right and these two people had met, the results would definitely not have been pretty…..

One last note on the Void of Course Moon- it has sometimes been used to conduct activities ‘under the radar’ and this quality of the lunar cycle would have aided the little gang covering for Kane’s nightmare. Out of it of course grew the Frankenstein creation of ‘Zodiac’, a faked serial killer.

One of the most notable instances of a successful attack conducted under a Void Moon: the first plane hitting the World Trade Center on 9/11. The date for the attack had been moved up and the plan was not really expected to succeed, as it was a scramble, but it did so beyond the wildest dreams of the planners. As a result I had a building and four years of my best work destroyed when building No 7 fell. So…I still keep close watch over such things.