Back to the start then. If neither fon nor Kane then we’ve got to go back to the first confirmed letters of Zodiac in LA. Keeping an eye still on Xenophon- recall he was also in the LA area at the time of Cheri Jo Bates murder in Riverside on October 30th, 1966. Cheri Jo attended church that morning at St. Catherine’s. This church was named for an early Christian Saint who was martyred by torture on the wheel, which meant having bones broken. She refused to succumb and so was beheaded, supposedly. Already there seem to be parallels to the crime. Catherine is often depicted holding her wheel, as above, or seated beside it, as in the most famous image of her

‘Saint Catherine of Alexandria is an oil painting by the Italian Baroque master Caravaggio…Saint Catherine…was a popular figure in Catholic iconography.’ Wikipedia

Again, Cheri Jo Bates attended Mass at St. Catherine of Alexandria Catholic Church, the morning of her last day on earth. From their webpage:

• The church. Built in 1957, it holds about 800 people.
• The rectory. Also built in 1957, it serves as the headquarters of the parish and the home of the priests.
• The school. It has about 360 students in kindergarten through eighth grade.

The Catherine Wheel was used as a torture device throughout the Inquisition- a depiction- not for the faint of heart: 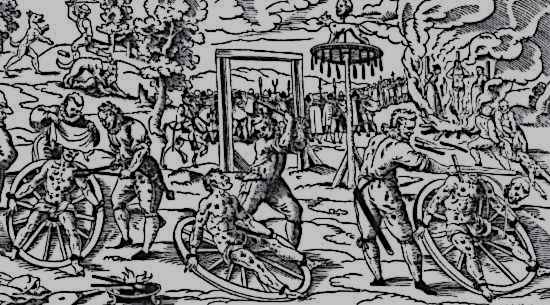