“Enjoy your life” reads the inscription in Greek. Recently uncovered by archeologist Kara near ancient Antioch 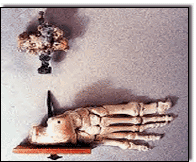 “Two thousand years earlier, by the same instinct of linguistic distinction, the snobbish Levantine patricians wrote in Greek, not the vernacular Aramaic. (The New Testament was written in the bad local patrician Greek of our capital, Antioch, prompting Nietzsche to shout that “God spoke bad Greek“. And after Hellenism declined, they took up Arabic. So in addition to being called a “paradise,” the place was also said to be a miraculous crossroads of what are superficially tagged “Eastern” and “Western” cultures.”

from: Chapter 1, The Apprenticeship of an Empirical Skeptic, The Black Swan by Nassim Nicholas Taleb, 2nd Edition, 2010, Random House (italics are mine)

Many have tried overlaying various Zodiac designs over the Bay Area Map.

The Phillips 66 Map was later provided with an instruction to overlay a circle onto the map and arrange certain radians of that circle supposedly revealed in a cipher.

Thus the triggering of map overlays by amateur sleuths. Recently I was inspired by a Zodiac Ciphers page commenter, ‘Toots’, to try it with the Halloween Card: 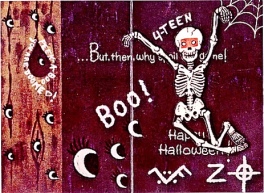 First I performed my standard geometric analysis of the inside of the card, where one might expect some sort of reveal. For easier working I rotated the design:

Note the arrow from “Boo” passes right through the heart of the skeleton or at least where it would have been had the person not been scared to death. Happy Halloween indeed!

After awhile I noticed something significant going on with Zodiac’s symbol. He has used it in many different ways: symbol, target, crosshairs, scorecard, register mark, location pointer, perspective viewpoint…but here turned sideways it can be read as a North arrow, as the ‘z’ has now become an N! It look now like a standard legend N arrow typically found on architectural or site plans. 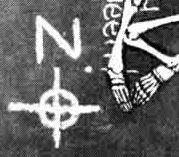 Following Z’s earlier instruction (bus bomb letter and map) using a locator circle register mark placed over and center on Mt Diablo. I decided to do the same with my skeleton/map overlay experiment as can be seen below

I then found a scale for the skeleton where it would point to the city of Antioch, based on the Christ metaphor and its relation to the significance of Antioch as the birthplace of Christianity. The emphasized viewpoint arrow comes from K’s homebase of Pittsburg (an assumption on my part), and the word ‘Boo’. The other large green arrow comes down vertically from the knothole with eyeball- see colored card above. And the spooky skeleton is oriented in relation to Mt Diablo- the Devil himself.

Antioch was a city in what is now Turkey where Christianity first took root, and where it is thought the word ‘Christian’ was first used. Founded in 300 BC as a Greek settlement it became the 3rd largest city in the ancient world.

The place name would have been meaningful to young Joe K, as his wife likely lived there about the time they first met. She had attended Brentwood High School- Brentwood being a town which is part of the Antioch metro area- while he was attending Pittsburg High.

Above shows an archeological reconstruction; a city on a river with a prominent island, somewhat like the California version.

The pose of the Christ-like skeleton then ties in with biblical Antioch. The skeleton may simply be referring to the idea of crucifixion itself- one of the most horrible ways to die that can be imagined.

The name Antioch may have been what attracted Joe K’s parents to the area when they moved the family from Natick, Ma., in the mid-1930s.

Curiously there are two familiar institutions from Joe K”s Natick neighborhood that can also be found in the Pittsburg area: one is the Greek Orthodox Church on the Pittsburg-Antioch Highway running through nearby Concord, CA

and the other, also in Concord, is the California Headquarters…

of The Improved Order of Red Men, a Mason-like society, whose building were prominently placed in Natick, Ma., Town Center.

Natick as we’ve seen in an earlier post was Joe K’s birthplace- where he’d spent his first 5 years.

There are other clues to Zodiac’s identity provided by the Halloween Card. In one of Grinell’s Zodiac Cipher posts regarding the links to the novel and film of ‘To Kill a Mockingbird’ he notes the release date of the film, December 25: one day before Joe K’s birthday. I’ll look more at the connections in a future post.

Jesus and Jehohanan: An Archaeological Note on Cruxifixion

At the beginning of the summer of 1968 a team of archaeologists under the direction of V. Tzaferis discovered four cave-tombs at Giv’at ha-Mivtar (Ras el-Masaref), which is just north of Jerusalem near Mount Scopus and immediately west of the road to Nablus. The date of the tombs, revealed by the pottery in situ, ranged from the late second century B.C. until A.D. 70. These family tombs with branching chambers, which had been hewn out of soft limestone, belong to the Jewish cemetery of Jesus’ time that extends from Mount Scopus in the east to the Sanhedriya tombs in the north west.

update 09/23/18- Sometimes it takes awhile for the best ideas to percolate and then they come to you just as you’re falling asleep! The spike through the heel is meant to refer not just to Joe’s birthday, December 26th, (maybe 25th if the time change to the West Coast is taken into consideration) but also to his middle name and his father’s first name: Achilles. Just as RAD in paRADise and in Boo Radley are clues to his last name KaRADanis, the spike, or arrow gives us the unusual Greek middle name of Achilles. George Achilles Karadanis of Pittsburg, California.

We already have suspect Xenophon, or Fon representing the Greeks of antiquity, and now we have Achilles. 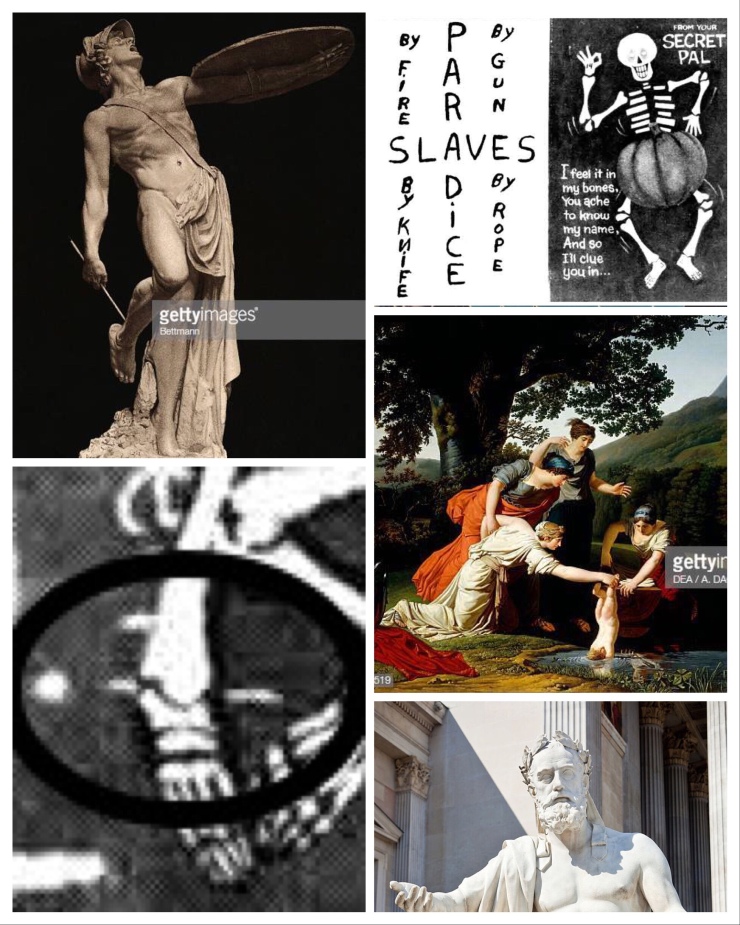